We develop custom, non-standard pipes and accessories, looking for a specific solution for each job.

Thanks to exclusive KRAH® technology we can develop an optimal solution for every need. We work in partnership with our clients to manufacture optimized tubes between 0.30 and 4 meters in diameter, with different profile designs adapted to the specific need of the work.

Without the need to modify the hydraulic diameter, we have the possibility of designing and manufacturing profiles adjusted to the pressure, rigidity and all the variables present in your work, to arrive at a technical solution with the best cost-benefit ratio.

The classic yellow of the interior of our pipes allows better visibility in the case of video inspections.

Why choose a Krah pipe?

Krah® high-density polyethylene structural pipes have the particularity of achieving high annular and longitudinal rigidity with very low weight.
This is achieved by combining:
- The helical arrangement of the ribs, which give it longitudinal rigidity.
- The design of a structural profile dimensioned according to the requests of annular rigidity of the conduction, achieving efficiency and avoiding the oversizing of the pipes.
- The characteristic low specific weight of HDPE high-density polyethylene.

Krah® high-density polyethylene pipes can be manufactured with the necessary rigidity, assigning different profiles depending on the different load conditions that the conduction will have to face along its route. IRAM 13414 Standard establishes that the annular rigidity of HDPE high-density polyethylene pipes must be at least SN2. When this rigidity is not sufficient, the profile must be designed according to the requirements of the work or project, the minimum data necessary to size it are:

Once the rigidity necessary for driving has been determined, the type of profile is determined and dimensioned.

HDPE HDPE has the lowest Manning coefficient (internal roughness) compared to other materials on the market. 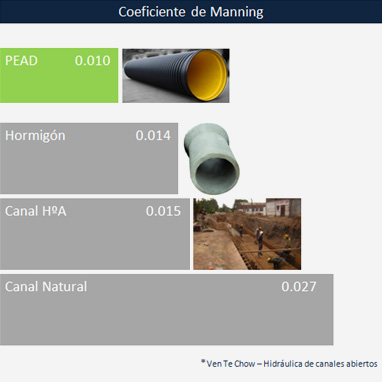 When comparing HDPE pipes with Concrete pipes, it can be deduced that:

- To conduct the same amount of flow, HDPE Krah® high-density polyethylene pipes need a diameter 10% smaller than that required for concrete pipes.
- In the case of having the same diameter in HDPE and in concrete, the HDPE will conduct 30% more flow.
- To conduct the same flow and with equal diameters, HDPE pipes will need a 40% lower longitudinal slope than that of concrete pipes, with the corresponding reduction in capping and the consequent savings in excavation.


Efficiency and speed of installation

Due to the low weight of the pipes, the logistics are carried out with light equipment, which also helps to load the trucks efficiently and safely.

The optimization of transportation lies in the possibility of sending deep-drawn pipes, thus reducing costs and increasing the capacity of shipments.

For its part, the handling of light pipes reduces the risks of work and the use of heavy machinery, since the collection can be solved in confined spaces at the foot of the trench, allowing the pipeline lowering operation to be streamlined.


Lengths that increase your performance

The standard length of the pipes is 6mts, but in the event that you have to solve specific requirements, such as hard-to-reach pipes, crossroads, streets, high-traffic routes, or culverts, you can request specific advice for manufacturing custom lengths.

The standard length, when compared to traditional concrete technology, will greatly increase the progress of your work.

HDPE high-density polyethylene is one of the most resistant materials to the majority of chemical compounds that appear in pipes, including SH2, which is the most dangerous element in sewer pipes.

Due to this, HDPE Krah® high-density polyethylene pipes guarantee their durability without the need for internal and / or external coatings and without any restriction on the magnitude of deformations in the pipe, since, on the one hand, the The material does not crack and, on the other hand, is completely homogeneous and resistant throughout its mass.

Abrasion is defined as wear on the surface of one body caused by particles from another body, called an abrasive.

It is a fundamental parameter when defining the field of application of a pipe, since it will determine the use, or not, of different materials. In the case of installations that carry suspended solids, or are unblocked with hydrojet, this property must be evaluated as essential.

To determine the resistance to abrasion, the overturning test is performed using the Darmstadt method. This test allows comparing the behavior of different types of pipes.

As seen in the graph, high-density polyethylene has the least wear.

In general, long-term deflections of no more than 5% are often asked of commercially available materials to prevent the tube section from losing its circular shape and cracking of the liner or inner layers. In the case of HDPE high-density polyethylene pipes, these drawbacks will not take place at any degree of deflection, since the material does not crack, its entire mass is inert and its molecular fusion joints maintain their properties.

The ductile properties of HDPE and the structural capacity of the pipe will not be affected by large deformations.

The elastic properties of the HDPE allow the formation of curves, between a certain range of values ​​of the radius of curvature, to make adjustments on site, without presenting dents or localized collapses, avoiding in these cases the need to resort to the inclusion of elbows or special pieces.

The lifetime of the entire Krah® High Density Polyethylene Pipe System for gravity and low pressure applications is estimated to be 100 years, including a safety margin. Each component is designed for a 50 year full and constant load case.

Krah® pipes, due to the use of polyolefins, have additional security.

As soon as the load is released, the time starts again, and with it the extra security.

From the diagram it can be seen that the pipes are designed for 100-year use (a), including a calculated safety margin, stability (b) is achieved at constant load.

HDPE Krah® high-density polyethylene pipes have a full range of connection possibilities, even to other materials:

Do you have any questions?

Do you have any questions or would you like to be advised on one of our products?